In my last blog post I summarized some of the recent Court Rule amendments that went into effect this September. While there were only a limited number of changes in the Part V Rules affecting 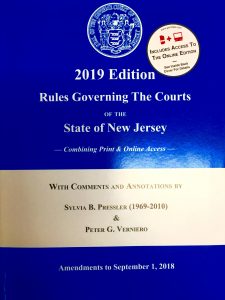 Family Part practice, I noted that there were amendments made in other sections of the Rules which had a direct or indirect impact upon Family Part practice in some fashion. In this blog post, I will discuss one of the more significant changes – those relating to actions to change the name of an adult and/or minor under Rule 4:72.

Several years back I wrote a blog post “What’s In A Name” in which I highlighted some of the practical and procedural considerations involved in effectuating a name change incident to a divorce. While at common law, any adult or emancipated person was at liberty to adopt any name as his or her legal name except for fraudulent or criminal purposes without resort to any court, if someone wished to change their name, that person was required to institute an action in “Superior Court” under N.J.S.A. 2A:52-1, et seq. by the filing of a verified complaint accompanied by a sworn affidavit. Court Rule R.4:72-1, et seq. further detailed the procedures to be followed in actions for a name change. However, neither the statute nor the rule specified which division or part of the “Superior Court” such name change actions were to be filed and heard, except for actions seeking a name change for a minor who was the subject of a pending family action or one concluded in the preceding three years, and in which case they were to be transferred to the Family Part in the vicinage in which that family action was pending or was concluded.

Consistent with the theme of most of the recent Rule amendments to delineate and clarify which Division or Part certain types of actions should be filed and heard, R. 4:72-1, et seq. has been substantially amended to address where such name change actions should be filed and heard. Further, the changes to this Rule also address the procedures relating to requests for a change of name incident to divorce which were silent in both N.J.S.A. 2A:52-1 and the prior versions of R. 4:72. Finally, the procedures governing the name change of minors were substantially modified as well.

First, R.4:72-1 now differentiates between actions for a change of name made by an adult and actions for a change of name on behalf of a minor. R.4:72-1(a)(1) clarifies that as a general rule actions for a change of name of an adult are to be filed and heard in the Law Division, Civil Part. They are to be commenced by the filing of a verified complaint containing not only the applicant’s date of birth but stating (1) that the application is not made with the intent to avoid creditors or obstruct criminal prosecution or for other fraudulent purposes; (2) whether the plaintiff has ever been convicted of a crime and, if so, the nature of the crime and sentence imposed; and (3) whether any criminal charges are pending against the plaintiff, and if so, such detail regarding the charges as is reasonably necessary to enable the Division of Criminal Justice or the appropriate county prosecutor to identify the matter. The Rule also includes provisions for service upon the appropriate authorities.

Significantly, a new subparagraph R. 4:72-1(a)(2) was included in the recent amendment dealing with an adult seeking to return to a prior name or for the assumption of a new surname in dissolution/divorce matters. Whether a product of history or convention, a wife usually took the surname of her husband upon marriage. Given its silence in N.J.S.A. 2:52-1, the necessity for a wife to file a separate action under that statute in order for her to resume her maiden name in the event of divorce was addressed by the passage of N.J.S.A. 2A:34-21. As originally enacted, that statute authorized a court, upon or after the granting of a divorce from the bounds of matrimony, to allow the wife to resume any name used by her before the marriage as well as to order the wife to refrain from using the surname of the husband as her name. That statute was amended in 1988 (as well as in 2013), and now reads as follows:

These changes were significant. The ability to change one’s name incident to divorce was no longer limited to the wife but to either spouse. Further, the language of the statute suggested that a change of name was not limited to a prior maiden name or name actually used prior to marriage, but may include the assumption of “any surname”.  Also, the amended statute eliminated the husband’s ability to refrain a wife from using his surname. Further, this statute authorized a court to allow for a spouse to resume/assume a surname both upon or after the granting of a divorce without imposition of any time limits. See generally Olevich v. Olevich, 258 N.J.Super. 344(Ch. Div. 1992).

Besides confirming that such name change requests incident to divorce or dissolution would generally be filed and heard in the Chancery Division, Family Part, as opposed to the Law Division, Civil Part, the language of this Rule differentiating between actions seeking a return to a prior name versus an assumption of a new surname are significant and appear to be in conflict with the statute, which does not include this differentiation. Under this new Rule, only actions for return to a name used prior to a marriage can be heard and filed in the Chancery Division, Family Part, either as part of the dissolution action or by post-judgment motion, while actions seeking to assume a new surname can only be heard and filed in the Chancery Division, Family Part when sought as part of the final relief in a pending dissolution case, i.e. when a judgment of divorce or dissolution is entered. Hence, if a spouse wished to assume a new surname after a divorce was granted and judgment entered, it would appear that a separate name change action would have to be filed in the Law Division under R.4:72-1(a)(1) and N.J.S.A 2A:52-1. It is noteworthy that despite what appears to be the clear language of N.J.S.A. 2A:34-21, trial courts have reached conflicting conclusions. In Holshue v. Holshue, 265 N.J. Super. 599 (Ch. Div. 1993), the court held that a spouse desiring to assume a new surname as opposed to resuming one previously used had to proceed under N.J.S.A. 2A: 52-1. However, the court in Rauber v. Rauber, 315 N.J. Super. 353(Law Div. 1998) interpreted N.J.S.A. 2A:34-21 to allow a spouse to assume any name. In implementing this Rule amendment, it would appear that the Supreme Court has sided with the interpretation reached by the court in Holshue.

Further, the Comments to the Rule suggest even though not referenced in the Rule, that the requirements of subparagraph (1) i.e. prior or pending criminal proceedings, avoidance of creditors or other fraudulent purposes, must also be met in subparagraph (2) cases. Whether this means that such matters must be included in the pleadings themselves or can still be addressed verbally at the time of the divorce/dissolution hearing as has normally been the case, is unclear.

The other significant amendment to this name change rule is the inclusion of a separate subparagraph dealing with the change of name in minors, R.4:72-1(b), and making clear that all such actions are to be filed and heard in the Chancery Division, Family Part. Curiously, a new subparagraph, R. 4:72-1(c) was added, and providing that an action for a change of name of both adults and minors in the same family shall also be filed and heard in the Chancery Division, Family Part. Such actions are to be commenced by the filing of a verified complaint by a parent or guardian on behalf of the child, and containing the same information, service and notice requirements, i.e. prior and pending criminal proceedings, avoidance of creditors or other fraudulent purposes as required in adult name change matters. The requirement that notice be served upon a non-party parent remains. R.  4:72-3. However, absent extraordinary circumstances, where a parent or guardian and the minor consent to the change of name, the court shall conduct a hearing in a summary fashion for the limited purpose of creating a record and confirming the information in the complaint.

While these Rule amendments do not appear to impact a spouse’s ability to effectuate in a simple and cost-free way to resume a maiden or previously used name incident to a divorce in most circumstances, there are situations which are not so clear cut and require a closer understanding of the Rules’ intricacies. Let the attorneys of James P. Yudes, P.C. help navigate you through this process.