Palimony Agreements. As our societal norms changed, it became more common place for couples to live together without the benefit of marriage. However, in most jurisdictions, New Jersey included, the laws and statutes favored marriage. Hence, when a relationship ended, the law only recognized the financial rights and obligations-i.e. spousal support or division of property-arising out of a marriage or other legally recognized relationship ( i.e. civil union, domestic partnership). These laws did not apply to “living together” relationships or their breakup, even if the couple had been together for many years. A financially dependent party could be jettisoned to fend for themselves without any recourse. Then came the case of the actor Lee Marvin and his longtime girlfriend. She sued him, claiming he had promised to support her for the rest of her life. The Court recognized that such promises could create an enforceable contract or agreement for which compensatory “damages” could be awarded. Since spousal support or alimony was only statutorily allowed upon divorce, the term “Palimony” was born to describe such damages. Following Kozlowski v. Kozlowski, N.J. 378 (1979), New Jersey recognized the enforceability of such
“ Palimony Agreements” arising out of such marital-type relationships. However, rarely were such “promises” reduced to writing. They were generally premised on statements orally made, or expressed or implied from the actions of the parties.
Perhaps concerned that the Courts had gone too far in enforcing such “Palimony Agreements”, the New Jersey Legislature in 2010 chose to amend the Statute of Frauds, N.J.S.A. 25:1-5(h), so as to require that any such contract must be in writing and signed by the person making the promise. However, the amendment went on to provide that “ no such written promise is binding unless it was made with the independent advice of counsel for both parties”. 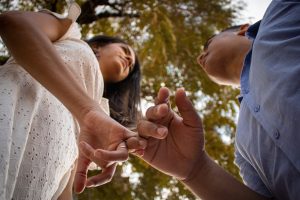