In a landmark decision issued today in the matter of Obergefell v. Hodges, Director, Ohio Department of Health, et. al., the United States Supreme Court ruled, in a 5-4 decision, that states must (a) no longer prohibit same-sex couples from marrying, and (b) must recognize same-sex marriages validly entered into.  While this decision does not necessarily change the law in the State of New Jersey (or the other 36 states along with the District of Columbia which already allow and recognize same sex marriage), it does represent the national acceptance of same-sex marriage, an issue that has gained considerable traction and attention in recent years.  As my colleague, Karen Willitts, Esq., wrote in October 2013, New Jersey allowed same-sex marriage as of September 2013.  In addition, two other blog posts (1. Gay Marriage in New Jersey: Does Apartheid Survive; 2. Are Domestic Partners in New Jersey “Separate But Equal” after the U.S. Supreme Court Decision in United States v. Windsor?) previously written by James Yudes, Esq., discussed the impact of the decision in U.S. v. Windsor on same-sex marriages.  It is clear from today’s decision that the Supreme Court has done a 180 degree turnaround with regard to its prior decision in U.S. v. Windsor, removing control over the validity of same sex marriages to individual states. 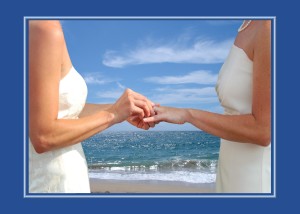 The Supreme Court opinion, which was written by Justice Kennedy and joined by Justices Ginsburg, Breyer, Sotomayor, and Kagan, based the Court’s decision on the basic tenet that the Fourteenth Amendment to the U.S. Constitution requires states to license ,marriages between two people of the same gender and to recognize marriages lawfully performed out-of-state between two people of the same gender.  Chief Justice Roberts and Justices Alito, Scalia, and Thomas all wrote dissenting opinions.

In this case, the petitioners were fourteen same sex couples and two men whose same sex partners are now deceased.  The respondents were state officials responsible for enforcing the laws on marriage that were in question.  The petitioners claimed the respondents violated the Fourteenth Amendment by denying them the right to marry or to have their marriages that were lawfully performed in other states given full recognition.  In an attempt to give faces to the petitioners and to establish that their purposes were not to denigrate marriage but rather to live their lives and honor their spouses’ memories the Court’s decision highlighted the specific circumstances of three of the couples seeking relief, as follows:

James Obergefell and his same sex partner John Arthur met over twenty years ago, fell in love and started a life together.  Mr. Arthur was diagnosed with amyotrophic lateral sclerosis (ALS), a debilitating, progressive and incurable disease.  Mr. Obergefell and Mr. Arthur decided to commit to one another by marrying before Mr. Arthur died.  The couple traveled from their home in Ohio to Maryland in order to legally marry.  They married inside the medical transport plane on the Baltimore Tarmac as Mr. Arthur’s illness made it extremely difficult for him to move.  Shortly thereafter, Mr. Arthur died.  Ohio state law did not allow Mr. Obergefell to be listed as the surviving spouse on Mr. Arthur’s death certificate because Ohio did not recognize same sex marriages and did not give credit to their marriage, even though it was lawfully performed in Maryland, which does recognize same-sex marriage.  Accordingly, Mr. Obergefell brought suit.

April DeBoer and Jayne Rowse celebrated a commitment ceremony to honor their permanent relationship in 2007.  In 2009, the couple fostered and then adopted a baby boy together.  Later that year, the couple welcomed a second son who required around the clock medical care into the family.  The next year, the couple welcomed a daughter with special needs into their family.  Under Michigan state law, only opposite sex couples could adopt and, therefore, only one party could be listed as the parent of the three children that the couple whom the couples adopted and were raising together.   In an emergency, schools, hospitals or the like would only be able to treat and consider the children as having one parent.  If tragedy were to befall one of the parties, the other party would have absolutely no legal rights over the children because the Michigan would not allow her to adopt the children.  Accordingly, the couple brought suit.

Army Reserve Sergeant First Class Ijpe DeKoe and his partner Thomas Kostura met and fell in love.  In 2011, Mr. DeKoe was deployed to Afghanistan.  Before he deployed, they decided to legally marry in New York.  Upon completion of his tour in Afghanistan, the couple settled down in Tennessee where Mr. DeKoe was stationed for his full time position with the Army Reserve.  Mr. DeKoe, who served this Nation to preserve the freedom the Constitution protects, had to endure the substantial burden of having his lawful  marriage to Mr. Kostura lawful marriage stripped from them while they lived in Tennessee, which did not accept the legality of same-sex marriages.

The Supreme Court’s analysis shifts to a brief discussion on the background and history of marriage in the United States, which the Court parlayed into a discussion of fundamental rights afforded to all citizens of the United States, which has long considered the right to marry as fundamental.  Accordingly, the Supreme Court opined that same-sex couples may exercise the right to marry.  The Court reasoned that the following four principles and traditions demonstrate that the reasons marriage is considered fundamental under our federal Constitution apply with equal force to both same sex couples and opposite sex couples:

In conclusion, the Court ended its decision with the following pronouncement: “No union is more profound than marriage, for it embodies the highest ideals of love, fidelity, devotion, sacrifice, and family.  In forming a marital union, two people become something greater than once they were.  As some of the petitioners in these cases demonstrate, marriage embodies a love that may endure even past death.  It would misunderstand these men and women to say they disrespect the idea of marriage.  Their plea is that they do respect it, respect it so deeply that they seek to find its fulfillment for themselves. Their hope is not to be condemned to live in loneliness, excluded from one of civilization’s oldest institutions.  They ask for equal dignity in the eyes of the law.  The Constitution grants them that right.  The judgment of the Court of Appeals for the Sixth Circuit is reversed.”

Regardless of where one’s opinions fall on this topic with regards to religious, political, economic or moral beliefs and factors, it is irrefutable that this decision raises an interesting legal argument as to the battle between Federal and State governments over whom should be in charge of governing laws on marriage and family.  In U.S. v. Windsor, the Supreme Court left the decision about marriage equality to the discretion of each and every State.  In today’s decision, the U.S. Supreme Court has made a determination that the individual States no longer have discretion to marriage equality and the legality of same sex marriages for themselves and created a national requirement that allows same-sex marriage, taking a giant and historic leap forward with regard to promoting equality and trying to lessen discrimination.