On January 17, 2018, the New Jersey Appellate Division decided the case of G.M. v. C.V. (A4820-15). The case involved the appeal of a May 6, 2016 order that denied the defendant’s request to vacate a final restraining order (FRO) entered in 2004. The reason for the denial that Trial Court gave was that the defendant’s motion did not include the transcript of the underlying 2004 FRO hearing. The Trial Court denied the application on these grounds despite the audio recording of the prior proceeding being incapable of being transcribed. The Appellate Division reversed the decision and remanded with instructions for “the Family Part to verify the unavailability of the audio record of the FRO hearing, to determine whether defendant has shown prima facie evidence of changed circumstances to dissolve the FRO, and unless she has not met this burden, to reconstruct the record of the FRO hearing consistent with the procedures of this opinion.” 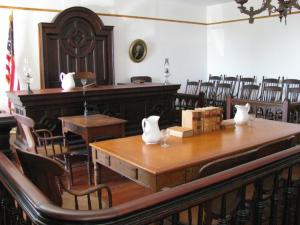 The father and mother married in 1994 and divorced in 2004. They had three children together, two of whom are adults and the other which in a teenager who has not reached the age of majority. The teenager resides with the father and his current wife in Florida, where he had lived since 2014. The father’s 2004 temporary restraining order (TRO) against the mother alleged harassment, citing that mother made “repeated calls to [father] and others” that were “harassing and threatening.” The father claimed these calls caused him fear.  The mother also “repeatedly called [father’s] girlfriend.” A history of domestic violence was also cited which included the mother “coming into the house and taking items belonging to the children; asserting in vulgar language her claim to ownership of the house; demanding that plaintiff move into the laundry room; stabbing him in the arm; running after him with two butcher knives; locking him out of the house in cold weather when he was scheduled for tests on his heart; keeping him up by flashing lights; chasing and hitting him with a battery charger while disparaging him with coarse language; threatening to run her car off the road while he was a passenger; hitting him in the head with a tripod; locking him out of the house with the cat; and kicking him in the ribs, legs, and chest, spitting in his face, and calling him a ‘f**king loser’ and ‘piece of s**t.’”

After the trial, a FRO was entered on August 18, 2004 barring the mother from contacting the father’s girlfriend, the girlfriend’s employer, and members of the father’s family.  The mother could still communicate with the father regarding parenting issues but those communications had to non-harassing/non-abusive. In 2016, the mother made an application to dissolve the FRO based upon a substantial change in circumstances. Mother cited the fact that over ten years had passed, the father had since moved to Florida, the support of the father’s former girlfriend to vacate FRO, her difficulty in finding employment and the fact that she couldn’t mediate parenting time issues with a FRO in place. She also made claims of an improved relationship with the father who responded that he “strongly” opposed the application and requested attorney fees. In his opposition certification, the father described the mother as “violent, irrational, and mentally unstable.” The father also claimed he is “extremely fearful of [her] and very concerned about [his] safety and security” if the court vacates the FRO.

The Appellate Division ultimately concluded: “Under these circumstances, we conclude that fundamental fairness and due process of law require the Family Part to confer with the parties and reconstruct the record of the FRO hearing.” The Appellate Court relied upon New Jersey Court Rule 2:5-3(f) which provides “[i]f a verbatim record made of the proceedings has been lost, destroyed or is otherwise unavailable, the court or agency from which the appeal is taken shall supervise the reconstruction of the record. The reconstruction may be in the form of a statement of proceedings in lieu of a transcript.” Although the rule cited is appellate in nature, the Appellate Division extended the application to the trial court citing: “We agree that in other contexts, we have held due process requires a judge to reconstruct the record.” The court cited the case of In State v. Izaguirre, 272 N.J. Super. 51 (App. Div. 1994), wherein “the stenographic notes of a murder trial were inadvertently destroyed shortly after the trial.” In the aforementioned case, “the trial judge developed a plan for reconstructing the record with the cooperation of both counsel.” In Izaguirre, the Appellate Division ruled that case, the “it becomes the duty of the trial court as a matter of due process entitlement of the parties to reconstruct the record in a manner that, considering the actual circumstances, provides reasonable assurances of accuracy and completeness.”