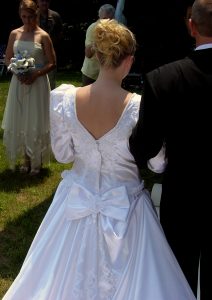 Marriage is not as popular as it once was.  Based on 2011 data available to the Pew Research Center, barely half of all adults in the United States were married, which was a record low.  In 1960, 72% of all adults ages 18 and older were married.  Contrast that with 2011, where only 51% of adults aged and 18 older were married.  In addition to higher incidences of divorce and cohabitation  in this century, as compared to 1960, another significant reason for the decline in the overall number of married adults, is that people do not marry as young now as they did in 1960.   More people wait until they are older to get married.  In 2011, just 20% of adults in the United States between the ages 18 to 29 were married, compared with 59% in 1960, according to the same research by the Pew Research Center. In 2011, the average age for first-time brides was 26.5 years, and for first time grooms the average age was 28.7 years.

Generally, the age at which persons in the United States can get married without parental consent or a judicial order is 18 (In Mississippi, a person has to be 21 to marry without parental consent).  The states do, however, have loopholes allowing minors under the age of 18 to marry. Only half of the states, however, have NO minimum age at which a child can be married.  According to Reuters, about 170,000 minors were married between 2000 and 2010 in 38 of the 50 states where data was available.

Currently, the minimum age to enter into a marriage or civil union in New Jersey is 18.  As other states do, New Jersey has exceptions wherein a minor can still marry.   Minors who are 16 or 17 can marry if they have parental consent.  Minors below the age of 16 can marry if they have the permission of a judge.  A judge can allow a minor of any age to marry; there is no absolute bar on a child of any age being permitted to marry.  One would hope that a court would not allow a literal child to marry, but in other states, children have indeed been given permission to marry.   According to the New Jersey based nonprofit group “Unchained at Last“,  3,499 minors (90% of whom were girls) were married between 1995 and 2012, including 178 who were younger than 15 years old.  New Jersey also has no statutory particular criteria or factors in its statute for a family court judge to assess in determining whether a minor should be permitted to marry.

Child marriage is considered an issue of abuse towards children and/or abuse towards women and girls.  According to Unicef, “Worldwide, more than 700 million women alive today were married as children. More than 1 in 3 – or some 250 million – were married before 15. Girls who marry before they turn 18 are less likely to remain in school and more likely to experience domestic violence. Young teenage girls are more likely to die due to complications in pregnancy and childbirth than women in their twenties; their infants are more likely to be stillborn or die in the first month of life.”   Additionally, “Evidence shows that girls who marry early often abandon formal education and become pregnant. Maternal deaths related to pregnancy and childbirth are an important component of mortality for girls aged 15–19 worldwide, accounting for 70,000 deaths each year. . . .If a mother is under the age of 18, her infant’s risk of dying in its first year of life is 60 per cent greater than that of an infant born to a mother older than 19. . . .  Even if the child survives, he or she is more likely to suffer from low birth weight, under nutrition and late physical and cognitive development. . . . . Child brides are at risk of violence, abuse and exploitation. . . . Finally, child marriage often results in separation from family and friends and lack of freedom to participate in community activities, which can all have major consequences on girls’ mental and physical well-being.”  Also, as stated by Unicef: “Marrying girls under 18 years old is rooted in gender discrimination, encouraging premature and continuous child bearing and giving preference to boys’ education. Child marriage is also a strategy for economic survival as families marry off their daughters at an early age to reduce their economic burden.”

People may be surprised that concerns about child marriage include the United States. Between 2000 and 2015, more than 207,468 minors were married in the United States; 87% of those minors were female.  Most of the time they marry adult men.   It is not difficult to find harrowing tales of abuse when a minor (typically a girl) is forced to marry against her will (usually to an older man).  At a minimum, they are 50 percent less likely to finish high school, four times less likely to go to college and more likely to have children sooner and more closely spaced than people who marry as adults.  They are more likely to experience mental and physical difficulties, and they have a divorce rate around 80%.

A BBC News report on October 23rd asked the question “Why Does the U.S. Have So Many Child Brides?”   Another article by the group Human Rights Watch was assessing the lack of progress in girls’ education in Afghanistan and that country’s problem with child marriage, which the reporter notes, is associated with girls dropping out of school, sinking into poverty, being at greater risk of domestic violence, and serious health risks.  The reporter was surprised to find, however, that countries like Afghanistan, however, had tougher laws on child marriage than many states in the United States.  In Afghanistan, for example, the youngest a girl can get married is age 16.  If, however, she has permission from her father or a judge, she can marry at 15.

Again, most states in the United States have laws more liberal in child marriage than Afghanistan because many states do not have any minimum age by which a person could marry.  In Florida, for instance, there is no minimum age at which a girl can marry, with the approval of a judge.   One such girl, Sherry Johnson, became part of a national crusade to bar child marriages.  Ms. Johnson was raped as a child by an adult member of her church, impregnated by age 10, and  then forced by her parents to marry her rapist at age 11.   A court in Florida allowed the marriage to occur.  Half of the states in the United States, including Florida and New Jersey, have no law that establishes a minimum age to marry.

In 2016, a bill (A3091) was introduced in the New Jersey State Legislature in an intent to amend N.J.S.A 2A:34-1 in order to bar marriages or civil unions for persons under the age of 18. The bill was proposed by Republican Assemblywoman Nancy Munoz who said she introduced the bill after hearing compelling stories of minors forced into marriages for religious reasons.  This bill in the New Jersey Legislature was the first of its kind in the United States.  This bill passed through the Legislature with overwhelming support, and nearly lead to New Jersey being the first state to impose an outright ban on marriages for minors.  The bill, however, was vetoed by Governor Chris Christie in May, 2017 with a “conditional” veto.  The governor claimed that he was concerned that this proposed statutory amendment interfered with some religious customs.  He also objected to the amendment based on the reasoning that New Jersey allows 16 years old minors to consent to sex and to have  abortions without parental knowledge or consent.  The governor, therefore, believed that the state should not ban outright marriage for minors, and that the state should allow marriage licenses  Therefore, the state should not ban outright all minors from marrying.  Others who opposed the bill suggested that the state be permitted to ban marriages for those under the age of 18 except for military members (who can enlist at age 17) and pregnant teenagers.

Governor Christie’s conditional veto contained a suggestion that New Jersey should allow minors to marry or to enter into civil unions but subject to more restrictions than provided for in New Jersey’s current statute, which allows 16 and 17 year old minors to obtain a marriage license with parental consent, and to allow marriage licenses from minors under the age of 16 with the permission of a family court judge.

However, in this country more and more states are assessing whether and under what circumstances to bar minors from marrying.  Most that have considered the issue, however, have not passed an outright ban on minors getting married, but have created more restrictions on child marriage, typically by at least establishing a minimum age at which a minor may marry.  In Virginia, a new law was passed last year that set the minimum age to marry at age 18, with exceptions for 16 and 17 year olds who had been emancipated by court order from their parents.  Previously, parents had been able to consent to children marrying as young as 13.  Connecticut has banned any person under the age of 16 from marrying.  New York raised its minimum marriage age from 14 to 17.   In Texas, for a minor to marry, the child must be emancipated from his or her parents before he or she can marry.

It is not yet known whether or when a new bill would be considered in the New Jersey Legislature or what it would say.  Perhaps a governor other than Governor Christie whose time in office is coming to a close might feel differently about an outright ban on a minor’s ability to  marry.  If New Jersey were to stay consistent with the way other states are handling the issue, New Jersey could and probably should establish a minimum age by which NO person could marry, in order to protect literal children from being married off by their parents.  If the Legislature is going to allow a family court judge to make a determination about whether a minor may marry, certainly the Legislature should create guidelines or factors in the statute for a court to examine to assess whether to grant such a request.   The Legislature could adopt a procedure as in Texas and Virginia – where a minor could marry – if the minor is emancipated from his or her parents, thus giving the minor the same rights as an adult, and which would prevent a minor from being forced into a marriage by his/her parents.

In this day and age, when most people are waiting until they are older to get married, it appears that it is time to assess our laws on the appropriateness of allowing minors to marry.