Usually our blogs are dedicated to issues pertinent to family type litigation and divorce, although we do on occasion diverge into social areas usually associated with the aftermath of divorce or its 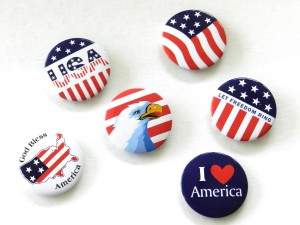 social effects. Having been allotted our blog spot corresponding to the New Year, I thought it appropriate to join the debate on the state of our nation and its political process. Perhaps some would deem this an unwise topic, sure to insult some and anger others. My Irish mother told me never to speak of politics or religion as these were topics best left to fools and liars.

In ignoring my mother’s good counsel, I suppose it is best to begin with an honest disclosure. I view myself as Republican, though that affiliation is not strong and has weakened over time. I am a Fiscal Conservative and a Social Liberal, as are I believe most Americans.   I think that Barack Obama was elected to the Presidency on a whirlwind of optimism and a promise of Hope and Change. America wanted to believe that an iconic transitory figure such as Obama could cure our malaise and bring us back to greatness. He ran his campaign like a soap commercial, promising to make a difference, promising us hope and a new world. We were promised that if elected, Obama would garner us respect in the World. Where Bush had been a laughing stock, he would be respected for his intellect and his world view. America would take its place as a world partner, making America great and the world safer. He would unite the country, improve jobs, level the playing field for all Americans and preside over a transformation of America into the successful melting pot envisioned by our forefather. He would be a President like Abraham Lincoln and Franklin Delano Roosevelt.  These were bold and appealing promises to a population reeling from terrorism, a poor economy and a national malaise. Today, however, a shirtless Russian thug is more respected by world  leaders than our President.

Our policies in the Middle East have destabilized the region. Our diplomacy seems disjointed and purposeless, resulting in the rise of Isis and an inevitable Middle Eastern nuclear bomb.  At home, we are divided, and there is violence in our streets and on our college campuses reminiscent of the Sixties. Our President began his tenure by announcing that Republicans could join him on the Hill, but they would need to be in the “back of the bus”, an unfortunate homage to Rosa Parks. He dismissed America’s white blue collar worker, once viewed as the backbone of our nation, as disaffected, clinging to guns and religion, and understandably angry as they become redundant. Under Obama, our work force has shrunk, impacting people of color disproportionately to other groups.  Our economy is artificially propped up by an unsustainable increase in our national debt, while the middle class shrinks as some join the wealthy class but far more are relegated to the lower class. Many in the middle class sustain their foothold by working two or three jobs, competing for a pay check with those illegally in our country.

We have learned not to trust the press. It is not just Brian Williams’ propensity for irrelevant self-aggrandizement; because of the bias in our news reporting, a record number of Americans look to alternate sources for information. We have learned about “Super-PACs” and the buying of the American political process by Big Business and Big Religion. Obama promised to be Ronald Reagan, FDR and Abraham Lincoln all rolled into one, and I think he wanted to be that person. He just fell terribly short. All those men had great and lofty ideas, but those ideas were coupled with a willingness to roll up their sleeves and delve into the details.  Obama is more of a”big idea” guy who leaves the details to others, which is why his signature legislation, “Obama Care”, helps a few obtain insurance at too high a cost to most Americans.

Against this backdrop, we enter a new Presidential election cycle, but one like none seen in the 20th or 21st centuries. People’s intolerance for the campaign promises of traditional politicians has begotten unlikely candidates who appeal to those fed up with the system of “talking heads” and “business as usual” in politics.  It is the age of the demagogue.  Donald Trump makes it clear that he is disinterested in learning the names of world leaders or, for that matter, educating himself on many of the complicated issues of our time. He appeals to our sense of Nationalism, and a sense that our nation would be “better” without illegal Mexicans or most Muslims.

Bernie Sanders offers to solve the ills of our society by taxing the rich and giving to the poor. It is an appealing narrative, particularly to our idealistic young. The redistribution of wealth will make us all better off.  You may recall, however, that Benjamin Franklin warned that once the majority discovered that they could through the vote take the wealth of the upper class for themselves democracy would end.

Then there is Hillary Clinton.  A manifestation of “The Cult of Personality”, she presided over Obama’s hideously unsuccessful Middle Eastern policy, yet no one blames her. She attacked any woman who came forward and accused her husband of sexual misconduct. No, such claims against her husband were not limited to adultery as the press would have you believe, but accusations of rape and sexual harassment.   Clinton says every woman should be believed when dealing with rape, yet she was the designer of every defensive strategy utilized by Bill, the presidential lothario. She is Hillary, and the press has already awarded her the presidential crown. She is the quintessential entrenched politician.  Beholden to big money and special interest, the Clintons entered the White House poor by political standards.  Today, they are undeniably wealthy. They sell power or the illusion of power. They are old fashioned “pork barrel politicians”.

We see in Trump and Sanders the rise to power of those on the fringe of politics who appeal to the masses and their frustration. Trump has found his scapegoat in the Mexican and the Muslim, blaming them for our lack of success and lack of safety.  Americans can be “great” again by throwing off the yoke of political correctness and ridding ourselves of outsiders who rot our society from within. Sanders simply blames the rich, and particularly Wall Street, for the woes of the world.  He argues that the wealthy take too much, and to make the nation better all we need to is take it back.

None of these candidates running for President are speaking to the needs of the country. How do you make America Great?  We are already great because we are a divergent, determined people. We come from every corner of the world. We are diverse, but most of us share the American Dream. We love our country and want to be proud of it.  We are also in trouble. Our tax system is antiquated, and our government spends more than it can reasonably expect to earn. We do not feel safe. We have politicians who want to win by polarizing us.  We want an outsider because we want a fresh idea. Hate is not a fresh idea.  Lenin already declared war on the rich, and threw Russia into a hundred year economic tumble. Many governments have tried to blame outsiders for their national woes, always with cataclysmic outcomes.

There are points to be made buried in extreme views. To be a nation, we need borders. We need to protect ourselves from extremists who justify their actions on religious orthodoxy, and we   need to regain our leadership position in the world. We need a press that give us information without telling us what to think, and we need a political process uncorrupted by special interest. We need to spend responsibly, and not mortgage our children’s future to win an election today. We need election reform.  Big contributions come at a price, and this country has paid that price for too long. We need strong moral leadership like Reagan , FDR, Lincoln and Washington, leaders who had a vision and a will to implement that vision.  We need leaders who are grounded in the real world but not corrupted by special interest. We need a President who represent us all, who looks to the best in us.  We need a fair tax system that does not stifle the American Dream.

Sanders and Trump are not the solution . . . but perhaps they will start the dialogue. They do cause one to ask a material question: Does either political party represent the will of the people? Most organizations seek to protect themselves.  Political parties maintain themselves by raising money. They raise money by making promises.  We want a government of and for the people. We all need to vote and in voting let our leaders know we will not tolerate business as usual.