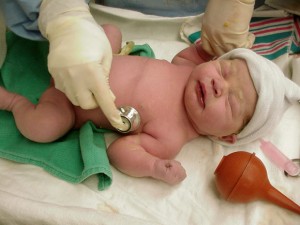 In a November, 2013 decision published on March 10th of this year, in what appears to be the first decision of its kind not only in New Jersey but in the United States, a Superior Court judge in the matter of Plotnick v. Delucca held that an expectant mother is not required to notify the child’s father when she goes into labor, nor is she required to allow him into the delivery room to witness the child’s birth.

In this case, the parties were not married.    Ms. Delucca became pregnant while the parties were dating, after which they became engaged to be married, but at the time of the court application and near to the end of the pregnancy, the parties had ended their relationship entirely.    Mr. Plotnick filed an emergent application seeking to be notified when Ms.  Delucca went into labor, to be present in the delivery room for the birth of the child, to be able to sign the birth certificate on the day of the birth, to have the child bear his last name, and for a parenting time order.

Hon. Sohail Mohammed, J.S.C. first denied Mr. Plotnick’s request for a pre-birth order for his name to be on the birth certificate, for the child to bear his last name, and for a parenting time order, finding that these requests were not emergent as there was not substantial, immediate and irreparable harm shown.  The judge noted that to enter a parenting time order, he has to conduct a best interest evaluation but that he could not do that before the child’s birth.  Moreover, as to the question of the birth certificate, the judge relied on the New Jersey Parentage Act.  The court reasoned that the Act’s definition of a “presumed father”, did not include a definition that could exist before a child’s birth.  However, the Act did allow a court to determine if there was a parent-child relationship by the preponderance of the evidence.   The court also examined case law such as In re T.J.S., 212 N.J. 334 (2012), where the Supreme Court affirmed the conclusion that there could not be a pre-birth order for a mother’s name to be on the child’s birth certificate in a case where a surrogate was used.    The judge found that it would be “inappropriate” to enter a pre-birth order allowing Mr. Plotnick to sign the birth certificate on the day of the birth and have the child bear his last name where the child’s mother did not consent even though neither disputed that Mr. Plotnick was the child’s father.   The judge pointed out that the Parentage Act allows Mr. Plotnick to file a certificate of parentage pre-birth with the appropriate state agency, and that New Jersey’s statute governing the issuance of birth certificates, N.J.S.A. 26:828(a)., allows the parents and hospital five days after birth to file a birth certificate.  Hence, the judge concluded that Mr. Plotnick’s requests were not emergent and there was no irreparable harm shown if emergent relief were not granted.

Judge Mohammed recognized the father’s interest in the child and his laudable desire to be present at the child’s birth, but took note of the Supreme Court’s caution against state action in the pre-birth time frame that would interfere with the individual rights possessed by the mother.  Judge Mohammed examined decisions of the New Jersey Supreme Court and United States Supreme Court in the area of abortion rights, as those cases discuss a woman’s privacy interests in the context of pregnancy and childbirth.   Judge Mohammed relied, for instance, on Roe v. Wade, 410 U.S. 113 (1973), in which the U.S. Supreme Court held that women have a fundamental due process right to control their bodies during pregnancy, although that right is not absolute because both the mother and the state have legitimate interests in the potential life before birth. Judge Mohammed also relied heavily on Planned Parenthood v. Casey, 505 U.S. 833 (1992), in which the U.S. Supreme Court acknowledged a husband’s “deep and proper concern and interest in his wife’s pregnancy and in the growth and development of the fetus”, yet held that it would be an undue burden to require a woman to notify her husband before she had an abortion.   In Casey, the Supreme Court reasoned, “It is an inescapable biological fact that state regulation with respect to the child a woman is carrying will have a far greater impact on the mother’s liberty than on the father’s.   The effect of state regulation on a woman’s protected liberty is doubly deserving of scrutiny in such a case, as the State has touched not only upon the private sphere of the family but upon the very bodily interity of the pregnant woman.  The court has held that ‘when the wife and the husband disagree on this decision, the view of only one of the two marriage partners can prevail.  In as much as it is the woman who physically bears the child and who is more directly and immediately affected by the pregnancy, as between the two, the balance weighs in her favor.'”   Id. at 896.   The Supreme Court further stated, “If the right to privacy means anything, it is the right of the individual, married or single, to be free from unwarranted governmental intrusion into matters so fundamentally affecting a person as the decision whether to bear or beget a child.”  Id.  The Supreme Court has further opined that a wife has no enforceable obligation to require her to advise her husband before she exercises her personal choices. Id. at 898.   The Supreme Court also took note that during a pregnancy “‘the mother who carries the child to full term is subject to anxieties, to physical constraints, to pain that only she must bear” and that “her suffering is too intimate and personal for the State to insist, without more, upon its own vision of the woman’s role, however dominant that vision has been in the course of our history and our culture.” Id. at 852.

Judge Mohammed further relied upon the New Jersey Supreme Court decision in Planned Parenthood of Cent. N.J. v. Farmer, 165 N.J. 609 (2000), where the Court held that the burden on a minor child to notify her parents when seeking abortion outweighed  any State or parental interest in requiring parental notification under the New Jersey Constitution.  Judge Mohammed concluded it would be an undue burden on Ms. Delucca to require her to notify Mr. Plotnick of when she went into labor.  He pointed out that Ms. Delucca and Mr. Plotnick were unmarried and that even in the case of  Planned Parenthood v. Casey, where the parties were married, the woman’s interests were  found by the U.S. Supreme Court to be stronger than her husband’s interests and, hence, she had no duty to notify her husband before terminating a pregnancy.

Judge Mohammed also relied on federal and state laws regarding patients’ rights to privacy.   The Judge noted that under New Jersey law, when a mother enters the hospital, she has rights to doctor/patient confidentiality, and a licensor/licensee relationship with the hospital, both of which create the expectation of patients in privacy.  The judge also cited to federal law under the Health Insurance and Portability Act of 1996 (HIPPA), which likewise protects patients’ privacy rights.

Judge Mohammed rejected Mr. Plotnick’s request to be present at the time of the child’s birth because his interests are not as well-settled as  Ms. Delucca’s well-settled legal rights and, therefore, he showed little chance in his emergent application for ultimate success on the merits.  In balancing the hardships, the judge stated that a woman’s decision as to whether to carry the fetus to term or to terminate the pregnancy has a greater impact on the child’s life and future than the presence of the child’s father in the delivery room.  Judge Mohammed also gave great consideration not only to Ms. Delucca’s decision to have the child, but the burden borne entirely on her as the carrier of the child during pregnancy.   She trained for the birth of the child.   At the time of the application, she had to appear telephonically as she had been hospitalized for the health of the fetus and was being closely monitored by hospital staff.   She had borne her own medical expenses and there was no indication that Mr. Plotnick paid for medical bills or other bills to prepare for the child’s birth.   The judge expressed that the State had an interest in the health of the mother and the child.  Judge Mohammed was concerned that Mr. Plotnick’s presence in the delivery room where Ms. Delucca did not want him to be would create additional stress on the mother and child.    He pointed out that the mother would be under immense physical and psychological pain already during childbirth  and he did not believe that the State should interfere with her privacy interest at such a critical time.

Judge Mohammed found that Ms. Delucca’s interests in privacy outweighed Mr. Plotnick’s rights and he was concerned about the “slippery slope” of subjugating the mother’s interests to the father’s given that the mother’s legal rights were more established.  What is apparent from this decision is that in New Jersey, while parents may have equal rights to custody and parenting without consideration of gender once a child is born, prior to a child’s birth, the mother’s and father’s interests are not equivalent, and the mother’s interest is superior given her privacy interests and the burden on her as the carrier of the child.