transition. For months, we have heard the candidates often contradicting themselves, suggesting that anyone on their side would make a better President than anyone in the opposition party, and yet immediately thereafter, sometimes without even taking a breath, opining that their party opponent is also not suited for office. These warranties and calculated retractions are all said straight-faced with innocent eyes, pleading with the listener to ignore the contradiction.

Frequently, the press will challenge the veracity and contradictions of the candidates’ words, more so if the candidates is Donald Trump or Bernie Sanders, and less so if it is the view of a candidate anointed by the press.  People no longer trust the press, and the Internet abounds with objectors and complainers that the press is corrupt or “in the bag” so to speak for a candidate, or using celebrity to make money.  The point is no one trusts government. Government is controlled by politicians,  so no one trust politicians.  Government is supposedly monitored and kept honest by an objective press, however, no one today believes the press to be objective. Hence no one trusts The Fifth Estate or its supervision of the political and governmental process. Since there is little trust for the political process, people look to vote for outsiders who promise to “shake up” the entrenched “establishment” as the people move towards a “Helter Skelter” solution embodied in  candidates like Trump or Sanders.

Families in divorce manifest, at their worst, some of these same dysfunctional indicia.  One must assume that in any marriage of reasonable duration, particularly when there are children, that 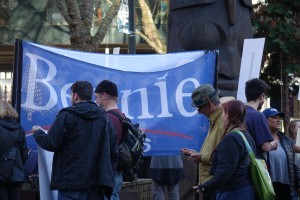 there must have been commonality between the spouses at one time, and perhaps even, if I dare to extrapolate, love. For what ever reasons marriage fail, often leaving previous companions to challenge the other spouse’s character and veracity.  Often these challenges are well met, however, there is a consequence in the fray. As people misrepresent and are challenged, people are pushed apart, and the goal of reasonableness and the desire to resolve real difference fall to the end of the priority list. An old employer of mine favored a plaque that read: “When you’re up to your ass in alligators, it’s easy to forget you came to drain the swamp.”  The point that I am trying to make is that altercations and name calling often drives everyone off point. In the political process, we forget the issue is who can best govern. In the context of divorce, sometimes ill will becomes it’s own issue clouding the real purposes of resolving: alimony, child support and equitable distribution. In the heat of counter invectives one loses humanity as one tries try to dehumanize one’s spouse. The end result an expensive, contentious trial before a judge who, once tempers rise, will not be excluded from suspicions of partiality.

The point of all this is simple. It is suggested that the resolution of any issue, be it economic, political or social, is best accomplished with clear and level heads sharing a goal to resolve differences for the good of all.  A kinder, gentler approach is not weak. It doesn’t matter “who started it”.  It is important that the adult in the room stop it.  We should all strive to be that sane adult, not the one who proclaims he is an adult while laughingly pouring gas on the proverbial fire, but the real adult who finds common ground in divergent views to bring folks back to reality. Most of us at the end of the day want what is fair. With cooler heads and an awareness that no one wins in a war, we should be able to get there. Usually compromise, although sometimes gut wrenching, is the best alternative. Before you can get to compromise you need to see that the other side has a point, and they need to see you do, too. Both sides have to recognize and humanize the other. Perhaps those vying to lead us cannot accomplish this goal, but there is no reason we can’t. In seeing how childish they all are, perhaps we can take a lesson from them and be the adults we want them to be. This approach has many benefits; if one focuses on real issues, you may resolve them. If one refuses to be drawn into the mud one does not get dirty and perhaps the other side will see that being in the sunlight beats lying in the mud. Being civil is not weak; it is just smart and effective.

Our next generation of leaders do not seem to get it but that does not mean we should take a page from their play book. Sometime contentious divorces remind me of a cartoon by satirist Gahan Wilson, which features the only standing war torn soldier in a field of death and  destruction, bearing the caption: “I think I won.”