As stated by the New Jersey Supreme Court, “The emotional attachments between grandparents and grandchildren have been described as 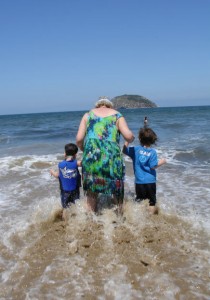 unique in that the relationship is exempt from the psycho-emotional intensity and responsibility that exists in parent/child relationships.   The love, nurturance, and acceptance which grandchildren have found in the grandparent/grandchild relationship  ‘confers a natural form of social immunity on children that they cannot get from any other person or institution.'”  Moriarty v. Bradt, 177 N.J. 84, 97 (2003)[quoting Chrystal C. Ramirez Barranti,  The Grandparent/Grandchild Relationship:  Family Resource in an Era of Voluntary Bonds, 34  Fam. Rel. 343, 346 (1985) (citing Arthur Kornhaber, M.D. & Kenneth L. Woodward,  Grandparents/Grandchildren:  The Vital Connection, xiii-xiv (1981))).]]   Our highest court has further stated, “when an individual does not have intergenerational family relationships there is a resulting lack of cultural and historical sense of self”. Id.

Such disputes have risen all the way to the United States Supreme Court.  In Troxel v. Granville, 530 U.S. 57, 65-66 (2000), the United States Supreme Court addressed the  constitutionality of Washington’s non-parental visitation statute as applied to grandparents seeking visitation with their grandchildren.  The Court recognized that parents have a fundamental right to make determinations as to the “custody, care and nurture” of their children without state interference.  The U.S. Supreme Court held that Washington’s grandparent visitation statute was so broad that it was an unconstitutional infringement on the fundamental rights of parents by merely stating that “any person” (without regard to that person’s relationship to the child) may petition the court for visitation rights “at any time” and that the court may grant visitation rights to that third party whenever “visitation may serve the best interest of the child.”  The Supreme Court criticized the lack of deference to the views of a child’s parents as to their children’s visitation with any other person.   The Court stated “so long as a parent adequately cares for his or her children (i.e., is fit), there will normally be no reason for the State to inject itself into the private realm of the family to further question the ability of that parent to make the best decisions concerning the rearing of that parent’s children.”  Id. at 69.   The Court further recognized that such a litigation itself my infringe on a parent’s constitutional rights to make decision’s for his/her child because the financial consequence of legal fees may impede the parent’s ability to plan for the child’s future.  Id. at 101.

Similarly, the New Jersey Supreme Court has also recognized the fundamentality of parental rights, stating, “Our law recognizes the family as a bastion of autonomous privacy in which parents, presumed to act in the best interests of their children, are afforded self-determination over how those children are raised.” In re D.C., 203 N.J. 545, 551 (2010).   In an action between a fit parent and a third party, there is a presumption of parental autonomy in favor of the parent. Tortorice v. Vanartsdalen, 422 N.J. Super. 242, 248 (App. Div. 2011) .  “A dispute between a fit custodial parent and the child’s grandparent is not a contest between equals”; rather, the courts have “long recognized that the best interest standard, which is the tie breaker between fit parents, is inapplicable when a fit parent is in a struggle for custody with a third party.” Moriarty v. Bradt, 177 N.J. 84, 116 (2003)

Consequently, third parties like grandparents and siblings have an uphill battle in seeking visitation rights with a child because they are not on equal footing with the parents, whose decisions as to whether to allow their children to visit with grandparents are given deference by the court due to their fundamental right to autonomous privacy in rearing their children without government interference.

(5)    If the parents are divorced or separated, the time sharing arrangement which exists between the parents with regard to the child;
(6)   The good faith of the applicant in filing the application;
(7)   Any history of physical, emotional or sexual abuse or neglect by the applicant; and
(8)   Any other factor relevant to the best interests of the child.

Grandparents should proceed to litigate cautiously with a child’s parents over visitation.  The Appellate Division has warned that “Before engaging the courts, grandparents should be obligated to make substantial efforts at repairing the breach and, in addition, litigation ordinarily should not be threatened before visitation has been denied with finality.  If litigation becomes necessary because the parent or parents have persistently resisted the grandparents’ respectful and patient overtures, it must be conducted with restraint. In other words, the grandparents must refrain from denouncing, demeaning, and impugning the parent’s character.” Wilde v. Wilde, 341 N.J. Super. 381, 397 (App.Div. 2001).