This week the media was abuzz with news of the demise of another celebrity marriage, this time with the separation of professional basketball player, Carmelo Anthony, from his wife Lala 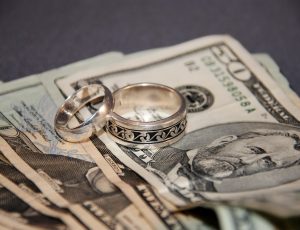 Anthony. The Anthony’s have been married since 2010 and have a 10 year-old son. Their potential divorce raises questions about what would happen with their assets and who would get custody of their son in their divorce, were such a case to arise in New Jersey. Unlike Angeline Jolie and Brad Pitt, about whom I blogged in “Fight Club: What You Can Learn From Angelina Jolie’s and Brad Pitt’s Long Term Relationship With Short Marriage”, it is reported that the Anthony’s have a prenuptial agreement in place. So if enforced, distribution of marital assets may not be an issue. However, the prenuptial agreement would not resolve issues of custody of and child support for their 10 year-old son.

A prenuptial agreement (also called antenuptial agreement or premarital agreement) is a contract that parties enter into before a marriage (or a civil union) in which they make provisions for equitable distribution of assets and/or spousal support in the event of a divorce. One New Jersey Court stated, “Antenuptial agreements fixing post-divorce rights and obligations [are] … valid and enforceable” and courts should “welcome and encourage such agreements at least ‘to the extent that the parties have developed comprehensive and particularized agreements responsive to their peculiar circumstances’.” D’Onofrio v. D’Onofrio, 200 N.J. Super. 361, 366 (App. Div. 1985). In order for a court to find that a prenuptial agreement is not enforceable, it must be demonstrated by clear and convincing evidence that:

(2) Did not voluntarily and expressly waive, in writing, any right to disclosure of the property or financial obligations of the other party beyond the disclosure provided;

The burden of proof would be on the party challenging the prenuptial agreement.

The next major issues the Anthonys could have relate to child support and custody of their young son. With respect to custody, the Anthony’s could share joint legal custody,  which grants the parents the ability to make important decisions as to the child’s health, well-being and general welfare, such as decisions on major medical issues, the child’s education, and the child’s religion. The alternative would be the one party has sole legal custody, which less common in New Jersey, in which case the parties do not make such decisions jointly.  New Jersey courts tend to encourage a shared, joint custody arrangement where possible.  The Anthony’s also need to make an arrangement for physical custody, which relates to where the child is physically living.  Usually, one parent has primary physical custody of the child, which means the child lives that parent most of the time, while the other noncustodial parent is given a schedule visitation or parenting time.  Courts in New Jersey also have the authority to grant any custody arrangement that the court finds to be in the child’s best interests,, and if there is a dispute between the parents over custody and/or parenting time, typically custody experts will be retained (or appointed by the court) and offer expert opinion to guide the court.

With respect to child support, under New Jersey law, the Child Support Guidelines governing child support apply in most cases. However, in “above-the-guidelines” cases they do not entirely apply.   In such cases, the divorcing parents have a combined net income that is greater than $187,200 and, therefore, the Child Support Guidelines do not entirely apply. The Guidelines would be applied to the portion of the parties’ combined net income up to $187,200. For the amount above the $187,200 figure, the court must apply a more subjective analysis to determine the appropriate level of support, applying the statutory factors of New Jersey’s child support statute, which are listed below. Ostensibly, the Anthony’s combined net income exceeds $187,200 per year.  It has been reported that Carmelo Anthony is paid more than $24 million per year by the New York Knicks.

In Strahan v. Strahan, 402 N.J. Super. 298 (App. Div. 2008), which involved the divorce of a professional football player, the Appellate Division considered whether a purported need for child support need $235,984 per year was appropriate and whether it was appropriate to order the defendant to pay 91% of the children’s child support needs. “[W]here the parties have the financial where-withal to provide for their children, the children are entitled to the benefit of financial advantages available to them.” Isaacson v. Isaacson, 348 N.J. Super. 560, 579 (App.Div.), certif. denied, 174 N.J. 364 (2002). “Children are entitled to not only bare necessities, but a supporting parent has the obligation to share with his children the benefit of his financial achievement.” Id. at 580. In setting child support, the court shall consider the factors set forth in N.J.S.A. 2A:34-23(a):

(2) Standard of living and economic circumstances of each parent;

(3) All sources of income and assets of each parent;

(4) Earning ability of each parent, including educational background, training, employment skills, work experience, custodial responsibility for children including the cost of providing child care and the length of time and cost of each parent to obtain training or experience for appropriate employment;

(5) Need and capacity of the child for education, including higher education;

(6) Age and health of the child and each parent;

(7) Income, assets and earning ability of the child;

(8) Responsibility of the parents for the court-ordered support of others;

(9) Reasonable debts and liabilities of each child and parent; and

(10) Any other factors the court may deem relevant.

In the context of high-income parents whose ability to pay is not an issue, “the dominant guideline for consideration is the reasonable needs of the children, which must be addressed in the context of the standard of living of the parties. Strahan v. Strahan, 402 N.J. Super. 298 (App. Div. 2008). The needs of the children must be the centerpiece of any relevant analysis.” Isaacson, 348 N.J. Super. at 581. The consideration of needs centerpiece of any relevant analysis.” Id. at 581. The consideration of needs must include the age and health of the children–with the understanding that infants’ needs are less than those of teenagers–as well as any assets or income of the children. Id.

Determining a child’s “needs” in high-income earning families presents “unique problems.” Id. at 582. “First, a balance must be struck between reasonable needs, which reflect lifestyle opportunities, while at the same time precluding an inappropriate windfall to the child or even in some cases infringing on the legitimate right of either parent to determine the appropriate lifestyle of a child. This latter consideration involves a careful balancing of interests reflecting that a child’s entitlement to share in a parent’s good fortune does not deprive either parent of the right to participate in the development of an appropriate value system for a child. This is a critical tension that may develop between competing parents. Ultimately, the needs of a child in such circumstances also calls to the fore the best interests of a child.” Id.

Another underlying issue in the case of the Anthony’s is the ability of the party that has primary residential to relocate to another state with the child. Historically, New Jersey case law did not favor allowing a custodial parent to relocate another state with a child. However, the major advancements in technology which allow people to remain in constant contact with each other and the ease with which one can travel interstate has shifted the tide. Under the right circumstances, it is not unheard of for a Court to grant a primary parent’s request to relocate out of the State of New Jersey with a child.

When determining a parent’s request to relocate to another state, an initial inquiry is whether the parent seeking to relocate has primary residential custody. This is important because the court must apply the appropriate standard in making determination on the request to relocate out of state. If the parent making the request to move is the parent with primary residential custody of the children, then the court will apply the standard established by the Supreme Court of New Jersey in Baures v. Lewis, 167 N.J. 91 (2001), which requires a custodial parent seeking to relocate out of New Jersey with the parties’ children to provide enough evidence to meet a threshold showing that there is (1) a good faith reason for the relocation and (2) that the move will not be inimical to the child(ren)’s best interests. In addition, under Baures, twelve (12) factors that the family court must consider when determining whether one parent may relocate with the parties child outside of New Jersey:

(1) the reasons given for the move;
(2) the reasons given for the opposition;
(3) the past history of dealings between the parties insofar as it bears on the reasons advanced by both parties supporting and opposing the move;
(4) whether the child will receive educational, health and leisure opportunities at least equal to what is available here in New Jersey;
(5) whether any special needs or talents of the child that require accommodation or its equivalent is available in the new location;
(6) whether a visitation and communication schedule can be developed that will allow the non-custodial parent to maintain a full and continuous relationship with the child;
(7) the likelihood that the custodial parent will continue to foster the child(ren)’s relationship with the non-custodial parent if the move is allowed;
(8) the effect of the move on extended family relationships here and in the new location;
(9 )if the child is of age, his or her preference;
(10) whether the child is entering his or her senior year in high school at which point he or she should generally not be moved until graduation without his or her consent;
(11) whether the non-custodial parent has the ability to relocate; and
(12) any other factor bearing on the child’s interest.  Id. at 116-17.

However, if the parents have a shared parenting time arrangement, such an application may be considered an application to change custody, which is analyzed under a different standard. O’Connor v. O’Connor, 349 N.J. Super. 381 (App. Div. 2002). When a modification of custody is sought, the child’s best interests are central to the inquiry. A “[m]odification of an existing child custody order is a ‘two-step process.’ R.K. v. F.K., 437 N.J. Super. 58, 62 (App. Div.2014) (quoting Crews v. Crews, 164 N.J. 11, 28 (2000)). “First, a party must show ‘a change of circumstances warranting modification’ of the custodial arrangements.” Id. at 63 (quoting Beck v. Beck, 86 N.J. 480, 496 n. 8 (1981)).” A litigant must first clear that initial hurdle before being “‘entitled to a plenary hearing as to disputed material facts regarding the child’s best interests, and whether those best interests are served by modification of the existing custody order.’” Id. at 62–63 (citation omitted).”

As can be seen the factual circumstances of the Anthony’s divorce are not so simple. The divorce of the Anthony’s brings to the fore front many considerations overlooked in divorces where there are prenuptial agreements. If you are in involved in divorce where there is a prenuptial agreement, under the right circumstances there may be a basis for arguing that the prenuptial agreement should not be enforced, and the custody and child support issues are a critical part of the divorce which should not be minimized. An attorney should be sure to make the necessary inquiry as to all claims available to their client and raise them early on in the proceedings.