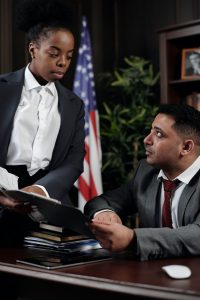 This happens with regularity. A new and sometimes even an existing client will tell me about a divorce case involving a friend, relative, or acquaintance that had issues “similar” to theirs’s, and that the judge, in that case, had decided those issues this way or that. They expressed a belief that how the judge decided those issues “must be the law”, and therefore, they would expect to have a similar result in their case. Why I certainly thank them for the information, they are then surprised and disappointed when I tell them that every divorce case is different and that how one judge may have decided the issues is not necessarily determinative on what will or shall happen in their case, and/or that the decisions of a judge in a different case are in no way binding upon the judge handling their case. The other judge’s decision may be the “law” in their friend, relative, or acquaintance’s case, but is not necessarily the law in theirs.
Before discussing the “legal” reasons for this, there are some very practical reasons why it is unwise to compare what may have happened in one divorce case with any other. The first reason is very simple. Just like no two people are exactly the same, neither are any two marriages nor the issues arising from the dissolution thereof. A primary breadwinner may “earn” the same amount of money, but one is a W-2 employee with a long-standing steady job and the other a small business owner whose income is based on many variables and creates a whole different set of considerations. The parties may be married for the same number of years but in one both parties have been gainfully employed, while in the other a party may have given up or deferred a career to raise children. In another, the parties may each have had two children, but in one the children are relatively healthy and doing well academically, but in the other, a child may have special needs or behavioral or educational deficits. The parties may have enjoyed the same family income, but one lived frugally and the other beyond their means. You get the point. As much as one may see similarities, no two marriages are alike. No two life stories are the same.
When a divorce case comes before a judge, there are certain legal authorities that the judge is to apply in deciding the issues in that case. There are statutes which have been enacted by the Legislature. There are Court Rules which have been promulgated by our Supreme Court. There are published decisions, which have been rendered by the courts in which they have interpreted, implemented, and/or applied those statutes and rules to a given case. A judge applies that legal authority to what it finds to be the facts and evidence in the case and renders a decision. However, since the facts and evidence are never exactly the same and vary from case to case, the resulting decision, even applying the exact same law, will vary as well. That, plus the fact that much of the law governing divorce matters is not based upon any sort of simple “formula”, but upon a multitude of factors a court is to consider, and which afford the court with a great level of discretion in determining. This ability to exercise discretion necessarily leads to different results depending not only upon the facts and circumstances of the case, but the weight of the evidence, the credibility of the testimony, and the “feel” of the case itself, so the judge can make a decision which is fair and equitable.
Even after explaining these practical reasons why no two divorce cases are exactly alike and that the disposition of one will not equate with the disposition of another, a client may hand me a copy of a written decision from another case and question why what the judge did in that decision should not be binding upon the judge in their case. They are surprised to hear that the answer is generally no. Pursuant to our Rules of Court only opinions of our New Jersey Supreme Court and decisions of the Appellate Division that have been “approved for publication” constitute a precedent and therefore binding legal authority upon the trial courts. Interestingly, even “published” opinions of another trial court are not binding upon the Appellate Division, nor even another trial court, although some may have persuasive value. However, more likely than not, what the client handed me was a decision of a court which was “unpublished”, which is usually the case since only a very small fraction of opinions are actually approved for publication. New Jersey Court Rule 1:36- 3 states with no room for ambiguity that “no unpublished opinion shall constitute precedent or be binding upon any court”. It may constitute the “law of the case” in that particular matter, but even then, may still be subject to review or reconsideration. In addition to not being binding, an unpublished decision may not be cited by any court. And while an unpublished decision may be offered as some sort of guidance, one must also provide the court with any and all contrary published opinions known addressing the issues for which it is being given. Besides the fact that an unpublished decision in a given case cannot be used as authoritative or controlling in regards to the disposition of issues in another case, the differing set of facts and circumstances present in any given case afford them little value.
While it is impossible to expect that a divorcing client will not hear about the stories of other people’s divorces and expect them to apply to their case, it is important that as the lawyer we diffuse that notion, and refocus the client on the facts and circumstances of their case, and not what may have happened in someone else’s.