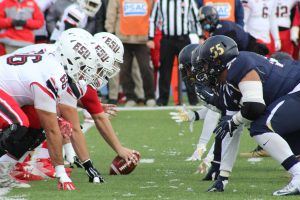 Why would I use up ink even if it is only metaphorical on something that can be seen as quite trivial on a Divorce Lawyers blog? Because what we saw on the field was, for the most part, civility, though there were momentary laps that can be easily attributed to human imperfection. The point I am trying to make is that in litigation lawyers often become enmeshed in the angst and hostility that their clients hold. Often both lawyer and client act out their frustration from bad
decisions by the court and bad actions on the other side.

It is not wrong to fight for what you want. Practice and planning to put your best you forward makes sense. Unlike in a football game, there is always the possibility of compromise where if not everybody wins at least nobody loses. However, if the question goes to the Judge, there will most likely be a defined winner. While that is the unfortunate reality of litigation. How the lawyer and the litigant handle it is important to them their family and to the Familial Court System in general.

We have a far better example of a graceful loss in yesterday’s game than from our own National Leaders. If you fall to the left you will point out Trump’s election results denial. If you fall right you will point to four years of impeachment and Clinton’s refusal to concede. Not very good role models on either side and the very annunciation of these issues has likely made your blood boil from one point or another.

What is to be done when the litigation falls the other way? Some things can be changed if the Judge has made a mistake in the final decision; you can appeal. You can always try to show the Judge how they errored with cogent facts or law. Sometimes unfortunately an unwanted outcome can not be fixed. Particularly in matrimonial litigation, there is a very broad discretion. Appeals can be costly and time-consuming and the loss may not be great enough to justify the expense of an appeal.

We have made significant law in the Appellant and Supreme Court and can assure you that success takes patience, time, and money. Regardless of when the matter is truly over and a victor ensconced, what do you do next? Do you take our politicians’ approach and accuse the other side of treachery and bad dealings or do you go on from there with your head high? If you have kids with the victor there is really no choice but to interact. If you can put the outcome in the right place and move on sometimes that is the healthiest approach. I am not saying there are not bad or even inappropriate outcomes in trials. The realization that Judges make honest mistakes is why there are two layers of appeals in New Jersey.

Often matters can be fixed when the law needs movement, as my office successfully did in the case of Dugan v Dugan where we established the law for the valuation of Law Practices or in Giovine v Giovine where we moved forward for the rights of battered woman to sue their husbands in that particular case, happened to be a sitting Judge. Mr. Dugan was a major fundraiser for the Democratic Pary, Giovine a Judge and in Miller v. Miller, we established that high net worth individuals should pay support not just looking to tax law but to the reality of their economic worth. The point is that even if you think your spouse is right or powerful or connected to the system, you do not always get what you want until all avenues of recourse have been exhausted. Not because of their power but because the law was not ready to change or the facts did not fall your way at the time of trial.

If the matter is worth fighting the good fight for every game, or litigation will have an end. When the game is over the question is how will you handle it? If you win will you be a gracious winner? It says a lot about ones’ character. If you lose and there is no rational place to go, accept it and move on. Support issues are subject to modification on change of circumstances as are child custody issues. The Chiefs are looking forward to their next season for their next success and you can do that too.