Let’s talk about polarization, which can now be considered a commonly used catchphrase. We see the destructive effects of it everywhere in our culture. Conservatives against liberals, Democrats versus Republicans, Pro-choice versus Pro-life. The list is endless but the rhetoric is similar, “we are right they are wrong,” “we have God and free will, and with that comes the right of humanity, which is on our side, and those who do not agree are just plain evil.” No one recognizes merit in the other’s thoughts, words, ideology, or position we have become quick to jump to the conclusion if you don’t see it my way you are in the wrong. 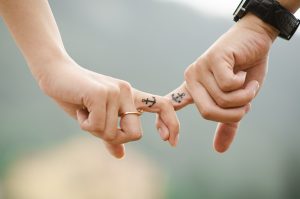 The attitude and conclusions mentioned above can be seen on an amplified platform through news channels, specifically through Fox vs CNN, which is only contributing to the slow but steady pulling our Nation apart. This concept that there is only one right view or approach to a problem or a way of life is not just political it has seeped into our culture. From movies to video games, sports to ballroom dancing we pit groups against each other take sides and cheer for our team. Unfortunately in marriage, this idea of right or wrong, my way or the highway is poisonous. Unlike in politics or a Rambo movie, marriages only work if there is compromise. I am frequently asked at events what is the biggest cause of divorce to which I respond marriage and move on. No one really wants a dissertation on the problems of our society with their martini.

Looking back over the decades of divorces numbering in the tens of thousands I would say the primary reason people get divorced is a lack of communication. That same rigid preconception that I am right and you are wrong that infects our public discourse often infects the more intimate discussion between spouses. The idea that there is one right way and that way is mine may work in the Senate ( not really ) but it does not work in the bedroom or for that matter in the kitchen. Marriages that work have open communication a sharing of ideas and goals and the flexibility to see the other side and make room in your brain and your heart to consider the alternative.

I know this view is simplistic but Occam’s Razor would assert that simplicity is the solution.
Admittedly it is not the solution for all. Where there is abuse or physical danger there is certainly no possible middle ground. Some people drift apart not because of a failure to communicate but due to a mutual disinterest in pushing the dialogue forward. The point is that there are a lot of reasons people get divorced. Some of those reasons are powerful and unresolvable within the marriage. Having said that many marriages could be repaired with an honest look under the hood and a decision to not just talk but listen. Followed by the more difficult step of not just listening but hearing and taking value out of the other’s thoughts and opinions and forming a compromise. Of course in the final analysis the cost of the compromise may exceed the value of the marriage. The decision is always personal and I am not suggesting that anyone compromise their core beliefs or values. I am only suggesting that before you proceed to divorce, one may want to think about the possibility that a few well-placed compromises would make things work.